The Motherhood of the Blessed Virgin Mary 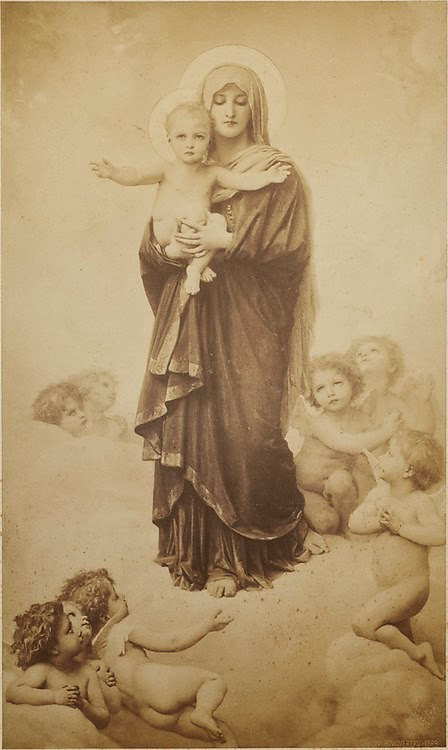 In the sixteenth century, even amidst their many divergences, the so-called Reformers agreed in utterly rejecting all the honors paid by the Catholic Church to the Blessed Virgin Mary, on the grounds that such veneration of the Mother detracted from the supreme worship due to her Divine Son. Four centuries have more than sufficed to show the result of so doing: the Son has followed the Mother! The descendants of those who refused to Mary the title and rights of Theotokos,—Mother of God—refuse to Jesus the title of Son of God in the traditional sense of the term. Many reject His Godhead altogether, placing Him merely at the head of the line of great moral and social world-teachers; others still retain the word “divinity” with respect to Him, but for them it is no longer synonymous with “deity.”

Holy Scripture tells us that those who first came to adore him who is Son of God and Son of Mary found him “with Mary his Mother.” At the scene of the first miracle at Cana, which marked the opening of his public life, “the Mother of Jesus was there.” In the tremendous hour when all was consummated, when types and shadows gave place to the mighty reality, “there stood by the Cross of Jesus His Mother.” And when the little flock who were to be the nucleus of the Church of God awaited in prayer the coming of the Paraclete, Who would teach them all truth, again it was in company with “Mary the Mother of Jesus.” Far from taking from the honor and love due to the Word Incarnate, devotion to Mary is a strong bulwark protecting the central doctrine. He is ever found with his Mother; where Mary is denied her rights, sooner or later Jesus is denied his; they stand or fall together.

This was realized in the year 431 when, at the General Council of Ephesus, the Church condemned the Nestorian heresy, whereby the Patriarch of Constantinople, Nestorius, had taught that, since in Christ there are two persons, a Divine and a human, Mary was mother only of the Man “Christ,” and therefore could not be called ”Mother of God.” He therefore denied ”that wondrous and substantial union of the two natures which we call hypostatic.”

On the occasion of the fifteenth centenary of the Council of Ephesus, the Sovereign Pontiff, Pius XI, issued the Encyclical Lux Veritatis, recalling the history of the heresy and commenting thus upon the dogma of the hypostatic union: “When once the doctrine of the hypostatic union is abandoned, whereon the dogmas of the Incarnation and of man’s Redemption rest and stand firm, the whole foundation of the Catholic religion falls and comes to ruin … When once this dogma of the truth is securely established, it is easy to gather from it that, by the mystery of the Incarnation, the whole aggregate of men and of mundane things has been endowed with a dignity than which certainly nothing greater can be imagined, and surely grander than that to which it was raised by the work of creation.”

Proceeding to speak of the special dignity of the Blessed Virgin Mary, the Pope emphasizes that, “because she brought forth the Redeemer of mankind, she is also in a manner the most tender Mother of us all, whom Christ our Lord deigned to have as his brothers; wherefore we may confidently entrust to her all things that are ours, our joys, our troubles, our hopes; especially if more difficult times fall upon the Church—if faith fail because charity has grown cold, if private and public morals take a turn for the worse.”

In this last connection we are reminded of another result of the loss of devotion to the Mother of God. Frequently and truly we hear and speak of the “paganism” of the present age. The decay of faith has been followed inevitably by a decline in morality, and our elaborate and complex civilization is threatened with the dissolving agent which contributed in no small measure to the overthrow of the magnificent civilization of old Rome: namely, the loss of the domestic virtues, the disappearance of healthy, normal family life, consequent upon the abandonment of the Christian ideals of marriage and parenthood.

It is a truism that one of the greatest social effects of Christianity was to raise the status of womanhood. Her legal position in the Ancient World was little better than that of a slave, and although classical literature furnishes us with examples of women who, in pagan homes, yet enjoyed high honor and affection, such are few indeed, and but serve to prove the rule. Divorce, infanticide, general degradation of womanhood, and not infrequently of childhood, were accepted features of pagan social order. The ideal and model of the “new woman” of the Christian dispensation was the Mother of God. It was Mary, “Mother of fair love,” “Madonna,” “our Lady,” who ennobled the degenerate old civilization, just as she tamed the fierce barbarian peoples; she it was who inspired the ideals of the later chivalry. In Mary, all her sex was uplifted; in her motherhood all motherhood became blessed. Now again the world needs the hallowing influence of the Mother of God and of men, if “the life of the family, the beginning and the foundation of all human society” is to be preserved in all its nobility and its purity.

Desirous “to mark the commemoration, and help to nourish the piety of clergy and people towards the great Mother of God,” His Holiness concludes the Encyclical by establishing the new feast of the Divine Motherhood, to be celebrated on October 11 by the universal Church.

Preface of the Blessed Virgin Mary: Et te in festivitate.