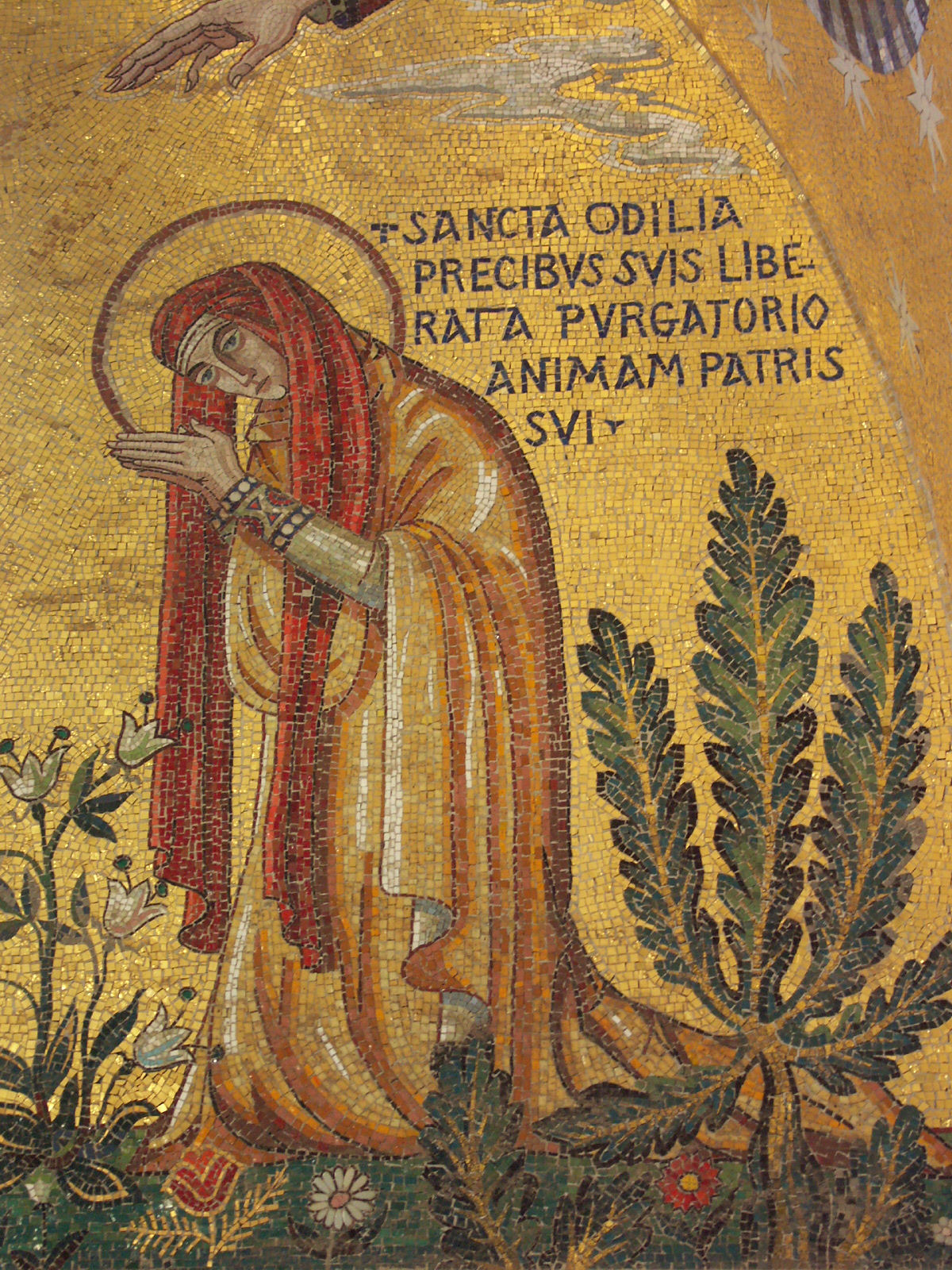 On this same day, we have alos the fifth of the Wise Virgins, whose bright lamps light us, during Advent, to the crib of Jesus, their Spouse. Odilia did not shed her blood for him, as did Bibiana, Barbara, Eulalaia, and Lucy; her offering was her tears and her love. Her wreath of lilies blends sweetly with the roses, which form the crowns of her four companions. Her name is held in special veneration in th east of France, and beyond the Rhine. The holy hill whereon her tomb has rested now these thousand years, is still visited by numerous and devout pilgrims. Several Kings of the Capetian race, and several Emperors of the House of Hapsburg, were descendants of the father of our Saint, Adalric or Atticus, Duke of Alsace.

Odilia was born blind. Her father insisted on her being removed form the house, for her presence would have been a continual humiliation to him. It seems as though this affliction was permitted by Providence, in order that the action and power of divine grace might be the more clearly manifested in her regard. The little exile was taken from her mother, and placed n a monastery. God, who designed to show the virtue of the holy sacrament of regeneration, permitted that her baptism should be deferred until she had reached her thirteenth year. The time at length came for Odilia to be made a Child of God. No sooner was she taken from the baptismal font, than she recovered her eye-sight, which was but a feeble figure of the light which faith had lit up in her soul. This prodigy restored Odilia to her father and to the world; and from that time forward, she had to defend, against unceasing attacks, the virginity which she had avowed to God. Her personal beauty, and her father’s wealth and power, attracted to her many rich suitors. She refused them all; and her father himself built a Monastery on the rocks of Hohenburg, wherein she served her divine Lord, governed a large community, an dgave relief to every sort of suffering.

After a long life spent in prayer, penance, and works of mercy, the day came which was to reward her for it all. It was this very day, the thirteenth of December, the feast of the holy virgin Lucy. The Sisters of Hohenburg, desirous of treasuring up her last words, assembled round their saintly Abbess. She was in an ecstasy, and already dead to the things of this life. Fearing lest she should die before she had received that holy Viaticum, which leads the soul to Him who is her last end, the Sisters thought it their duty to rouse her from the mystic sleep, which, so it seemed to them, rendered her forgetful of the duties which she had to perform. Being thus brought to herself, she turned to the community, and said to them: “Dear Sisters, why have you disturbed me? Why would you again oblige me to feel the weight of this corruptible body, when I had once left it? By the favor of his divine Majesty, I was in th ecompany of the virgin Lucy, and the delights I was enjoying were so great that no tongue could tell them, nor ear hear them, nor human eye see them.” No time was lost in giving her the Bread of life and the Chalice of salvation, which having received, she immediately rejoined her heavenly companion, and the thirteenth day of December thus united into one of the feasts of the Abbess of Hohenburg and of the Martyr of Syracuse.

The Church of Strasburg, which honors Odilia as one of its greatest glories, has the following lessons for this feast. By giving them a place here, we do not adopt the statement they contain with regard to the Rule which was followed in the Monastery of Hohenburg. Mabillon, who porves that St. Odilia followed the Rule of St. Benedict, shows that the Canonican Rule, as it was called, did nto exist at that time.

The ways of God in thy regard, O holy Virgin, were admirable indeed, an dhe manifested in thee the riches and the power of grace. He deprived thee of sight, that so thy soul might the more eagerly cling to his own infinite beauty; and when afterwards he restored thee thy bodily vision, thou hadst already made choice of the better part. The harshness of thy father deprived thee of the innocent pleasures of home; but it prepared thee to become the spiritual mother of so many noble virgins, who, following thy example, trampled on all the vanities of the world. Thou didst choose a life of humility, because thy heavenly Spouse Jesus had humbled himself for our sakes. Thou didst imitate him also in his being our divine Deliverer, an dtaking upon himself all our miseries, for thou hadst the tenderest compassion on the poor and the sick. Thou didst take on thyself the care of a poor leper, that had been abandoned by all else; with a mother’s courage thou didst feed him, and affectionately dress his loathsome sores. And is it not this that our Jesus is coming down from heaven to do for us; to heal our wounds by embracing our human nature, and to nourish us with that food, which he is preparing to give us at Bethlehem? While the leper was receiving thy loving care, the frightful disease, which excluded him from the society of his fellow creatures, suddenly disappeared; a delicious odor came from his whole person, whereas before, none but a saint like thyself could have borne to approach him. Is it not this which Jesus is coming down to do for us? The leprosy of sin was upon us; his grace heals us, and man regenerated sheds around him the good odor of Christ.

In the midst of the joys which thou art now sharing with Lucy, remember us, O thou that wast ever so compassionate to the needy! We cannot forget the tears which thou didst shed, and the prayers thou didst offer up for the soul of thy father after his death, and by which thou didst deliver him from purgatory, and open the gates of heaven to him that had banished thee from his house. Thou art no longer in the land of tears; but thine eyes are opened to the light of heaven and contemplate God in his glory; pray therefore for us, for thy prayers are now more powerful than heretofore. Think of us who are poor and infirm; obtain the cure of our maladies. The Emmanuel, who is coming to us, tells us that he is the Physician of our souls, for he has said: “They that are in health need not the Physician, but they that are ill.” Ask him that he cure us of the leprosy of sin, and make us become even like unto himself. Pray for France, thy country, and help her to maintain the purity of the Catholic faith. Watch over the ruins of the Holy Empire. Heresy has disunited the members of that great body; but it will once more flourish, if our Lord, propitiated by such prayers as thine, vouchsafe to bring Germany back again to the true faith and to submission to the Church. Yea, pray that these glorious things be brought about for the honor and glory of thy Divine Spouse, and that nations, now weary of their errors and disunion, may unite together in propagating the Kingdom of God upon earth.

Let us consider the Ever Blessed Mother of God leaving her humble dwelling at Nazareth, in order to visit her cousin, St. Elizabeth. The Church honors this Mystery of the Visitation on the Friday in Ember Week of Advent, as we have mentioned above, in the Proper of the Time. We will let St. Bonaventure related this sublime incident of Mary’s life, convinced that our readers will be pleased to hear the Seraphic Doctor revealing to them, with his wonderful unction, these preludes to the Birth of Jesus.

“After this, our Lady, pondering the words spoken unto her by the Angel concerning her cousin Elizabeth, resolved to visit her, that she might congratulate with her and render her service. She, therefore, together with Joseph her Spouse, set out from Nazareth for the houswe of Elizabeth, which might perhaps be fourteen or fifteen miles distant from Jerusalem. Neither the roughness nor the length of the journey discouraged her; but she walked with haste, forasmuch as she wished to be little seen in public. She was not, like other mothers, burdened by her Child, nor was it to be thought that the Lord Jesus would be a burden to his Mother. See, therefore, how the Queen of heaven and earth takes this journey alone, with none but her Spouse Joseph; not riding, but walking; neither is she escorted by troops of soldiers and barons, nor attended by handmaids and fine ladies. Her train is poverty, humility, modety, and the beauty of all virtues. The Lord himself, too, is with her; and he verily hath a numerous and honorable suite, but it is not that of the world, vain and pompous.

“Now, when she had entered the house of Elizabeth, she greeted her saying: Hail! my Sister Elizabeth! But she, exulting, and all full of joy, and inflamed by the Holy Spirit, rises and most tenderly embraces Mary, exclaiming for joy: Blessed art thou among women, and blessed is the fruit of thy womb! And whence is this to me, that there should come unto me the Mother of my Lord? For as soon as the Virgin had greeted Elizabeth, John, in his mother’s womb, was filled with the Holy Ghost, as was likewise the mother. Nor was it that the mother was filled and then her child, but contrariwise, the child was filled first, and he communicated the Spirit unto the mother. The babe effected nought in Elizabeth’s soul, but he merited that the Holy Ghost should do a work in her soul, because the grace of the Divine Spirit had descended into him with greater abundance, and he was the first to receive the grace. And as Elizabeth had perceived the coming of Mary, so did John perceive the coming of Jesus. Therefore was it, that he leaped for joy, and she prophesied. See the virtue of our Lady’s words, when by their utterance there is conferred the Holy Ghost; for so replenished was Mary with Him, that, by her merits, he filled others also with himself. Upon this, Mary made answer unto Elizabeth, saying: My soul doth magnify the Lord, and my spirit hath rejoiced in God my Savior.”