Saturday of the Fourth Week of Lent 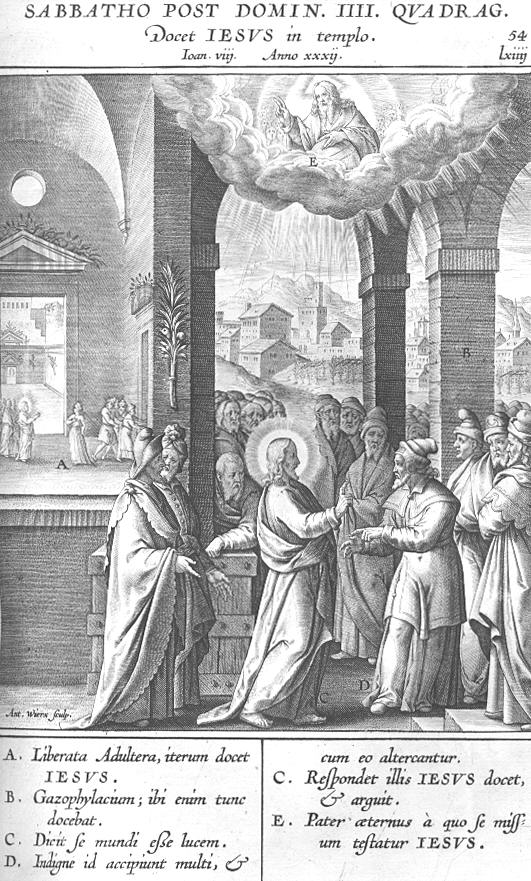 This Saturday, in the early ages of Christianity, was called Sitientes, from the first word of the Introit of the Mass, in which the Church addresses her Catechumens in the words of Isaias, and invites them that thirst after grace, to come and receive it in the holy Sacrament of Baptism. At Rome, the Station was originally in the Basilica of Saint Laurence outside the walls; but it was found inconvenient, on account of its great distance from the City; and the Church of Saint Nicholas in carcere, which is within the walls, was selected for today’s Station.

How these words of love must have consoled the hearts of our Catechumens! Never did our heavenly Father express his tender mercy towards us in more glowing terms: and he bade his Prophet deliver them to us. He gives the whole earth to his Son, Jesus Christ, our Incarnate Lord, not that he may judge and condemn it, as it deserves, but that he may save it. This divine Ambassador having come on the earth, he tells all that are galled by fetters, or that sit in the gloomy shadow of death, to come to him, promising them liberty and light. Their hunger shall be appeased, and their thirst quenched. They shall no longer pant under the scorching rays of the sun, but shall be led by their merciful Shepherd to the cool shades on the banks of the water of life. They came from every nation under heaven: the Fountain, the Font, shall be the center where all the human race is to meet. The Gentile world is to be henceforth called Sion, and the Lord loveth the gates of this new Sion above all the tabernacles of Jacob. No: God had not forgotten her during the long ages of her idol worship; his love is tender as that of the fondest mother; yea, and though a mother’s heart may forget her child, God never will forget his Sion. You, then, who received Baptism at your very entrance into the world but have, since then, served another Master besides Him to whom you swore perpetual allegiance at the Font—be of good heart! If the grace of God has found you submissive, if the holy exercises of Lent and the prayers offered for you by the Church have had their effect, and you are now preparing to make your peace with God—read these words of your heavenly Father, and fear not! How can you fear? He has given you to his own Son; he has told him to save, heal, and comfort you. Are you in the bonds of sin? Jesus can break them. Are you in spiritual darkness? He is the Light of the world, and can dispel the thickest gloom. Are you hungry? He is the Bread of Life. Are you thirsty? He is the Fountain of living Water. Are you scorched, are you burnt to the very core, by the heat of concupiscence? Even so, poor sufferers! you must not lose courage; there is a cool fountain ready to refresh you, and heal all your wounds; not indeed the First Font, which gave you the life you have lost; but the second Baptism, the divine Sacrament of Penance, which can restore you to grace and purity!

What a contrast between the tender mercy of God, who invites all men to receive his Son as their Redeemer, and the obduracy of heart wherewith the Jews receive the heavenly Ambassador! Jesus has proclaimed himself to be the Son of God and, in proof of his divine origin, has for three long years wrought the most astounding miracles. Many of the Jews have believed in him, because they argued that God could never have authorized falsity by miracles; and they therefore accepted the doctrine of Jesus as coming from heaven. The Pharisees hate the light, and love darkness; their pride will not yield even to the evidence of facts. At one time they denied the genuineness of Jesus’ miracles; at another, they pretended to explain them by the agency of the devil. Then too, they put questions to him of such a captious nature that, in what way soever Jesus answered, they might accuse him of blasphemy, or contempt for the Law. Today, they have the audacity to make this objection to Jesus’ being the Messias—that he gives testimony in his own favor! Our Blessed Lord, who knows the malice of their hearts, deigns to refute their impious sarcasm; but he avoids giving them an explicit answer. It is evident that the Light is passing from Jerusalem, and is to bless other lands. How terrible is this punishment of a soul that abuses the truth, and rejects it by an instinctive hatred! Her crime is that sin against the Holy Ghost, which shall not be forgiven, neither in this world, nor in the world to come. Happy he that loves the truth, though it condemns his evil passions, and troubles his conscience! Such a one proves that he reveres the wisdom of God; and if it do not altogether rule his conduct, it does not abandon him. But happier far he that yields himself wholly to the Truth and, as a humble Disciple, follows Jesus. He walketh not in darkness; he shall have the light of life. Let us then lose no time, but take at once that happy path marked out for us by Him who is our Light and our Life. Keeping close to his footsteps, he went up the rugged hill of Quarentana, and there we witnessed his rigid Fast; but now that the time of his Passion is at hand, he invites us to follow him up another mount, that of Calvary, there to contemplate his Sufferings and Death. Let us not hesitate; we shall be repaid—we shall have the light of life.

Let us end these first four weeks of Lent with a Hymn to our Blessed Lady, the Mother of Mercy. Saturday is always sacred to her. The Hymn we give is taken from the ancient Roman-French Missals.