Saint John Before the Latin Gate 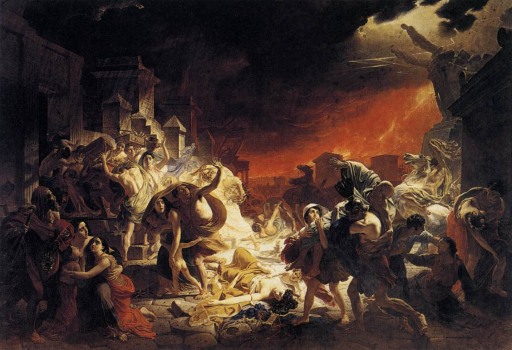 The Beloved Disciple John, whom we saw standing near the Crib of the Babe of Bethlehem, comes before us again today; and this time, he is paying his delighted homage to the glorious Conqueror of death and hell. Like Philip and James, he too is clad in the scarlet robe of Martyrdom. The Month of May, so rich in Saints, was to be graced with the Palm of St. John.

Salome one day presented her two sons to Jesus and, with a mother’s ambition, had asked him to grant them the highest places in his kingdom. The Savior, in his reply, spoke of the Chalice which he himself had to drink, and foretold that these two Disciples would also drink of it. The elder, James the Greater, was the first to give his Master this proof of his love; we shall celebrate his victory when the sun is in Leo; it was today that John, the younger Brother, offered his life in testimony of Jesus’ Divinity.

But the martyrdom of such an Apostle called for a scene worthy the event. Asia Minor, which his zeal had evangelized, was not a sufficiently glorious land for such a combat. Rome—whither Peter had transferred his Chair and where he died on his cross, and where Paul had bowed down his venerable head beneath the sword—Rome alone deserved the honor of seeing the Beloved Disciple march on to Martyrdom, with the dignity and sweetness which are the characteristics of this veteran of the Apostolic College.

Domitian was then Emperor—the tyrant over Rome and the world. Whether it were that John understood this journey of his own free choice, and from a wish to visit the Mother-Church, or that he was led thither bound with chains, in obedience to an imperial edict—John, the august founder of the Seven Churches of Asia Minor, appeared before the Tribunal of pagan Rome. He was convicted of having propagated, in a vast province of the Empire, the worship of a Jew that had been crucified under Pontius Pilate. He was a superstitious and rebellious old man, and it was time to rid Asia of his presence. He was therefore sentenced to an ignominious and cruel death. He had somehow escaped Nero’s power; but he should not elude the vengeance of Cæsar Domitian!

A huge cauldron of boiling oil is prepared in front of the Latin Gate. The sentence orders that the preacher of Christ be plunged into this bath. The hour is come for the second son of Salome to partake of his Master’s Chalice. John’s heart leaps with joy at the thought that he—the most dear to Jesus, and yet the only Apostle that has not suffered death for him—is at least permitted to give him this earnest of his love. After cruelly scourging him, the executioners seize the old man, and throw him into the cauldron; but lo! the boiling liquid has lost all its heat; the Apostle feels no scalding; on the contrary, when they take him out again, he feels all the vigor of his youthful years restored to him. The Prætor’s cruelty is foiled and John, the Martyr in desire, is to be left to the Church for some few years longer. An imperial decree banishes him to the rugged Isle of Patmos, where God reveals to him the future of the Church, even to the end of time.

The Church of Rome, which counts the abode and martyrdom of St. John as one of her most glorious memories, has marked, with a Basilica, the spot where the Apostle bore his noble testimony to the Christian Faith. This Basilica stands near the Latin Gate, and give a title to one of the Cardinals.

In honor of the great Apostle of love, we give the following Sequence, composed by Adam of Saint-Victor.

We are delighted to meet thee again, dear Disciple of our risen Jesus! The first time we saw thee was at Bethlehem, where thou wast standing near the Expected of Nations, the promised Savior, who was sweetly sleeping in his Crib. We then thought on all thy glorious titles: Apostle, Evangelist, Prophet, high-soaring Eagle, Virgin, Doctor of Charity, and, above all, Jesus’ Beloved Disciple. Today, we greet thee as Martyr; for if the ardor of thy love quenched the fire prepared for thy torture, thy devotedness to Christ had honestly and willingly accepted the Chalice, of which he spoke to thee in thy younger years. During these days of Paschal Time, which are so rapidly fleeing by, we behold thee ever close to this divine Master, who treats thee with every mark of affection. Who could be surprised at his partiality towards thee? Wast thou not the only one of all the Disciples who stood at the foot of the Cross? Was it not to thee that he gave the care of his Mother, and made her thine? Wast thou not present when his Heart was opened, on the Cross, by a Spear? When, on the morning of the great Sunday, thou repairedst with Peter to the Tomb, wast thou not, by thy faith, the first of all the Disciples to honor Jesus’ Resurrection? Oh, yes! thou hast a right to all the special love wherewith Jesus treats thee—but pray to him, for us, O blessed Apostle!

We ought to love him for all the favors he has bestowed upon us; and yet we are tepid in his love—we humbly confess it. Thou hast taught us to know the Infant Jesus, thou hast described to us the Crucified Jesus; show us now the Risen Jesus, that we may keep close to him during these last few days of his sojourn on earth. And when he has ascended into heaven, get us brave hearts, that, like thee, we may be prepared to drink the Chalice of trials which he has destined for us.

Rome was the scene of thy glorious confession, O holy Apostle! She is most dear to thee; unite, then, with Peter and Paul in protecting her. If the palm of Martyrdom be in thy hand as well as the pen of the Evangelist, remember it was at the Latin Gate that thou obtainedst it. It was in the East thou didst pass the greater part of thy life; but the West claims the honor of counting thee as one of her grandest Martyrs. Bless our Churches, re-animate our Faith, rekindle our Love, and deliver us from the Antichrists, against whom thou warnedst the Faithful of thy own times, and who are causing such ravages among us. Adopted son of Mary! thou art now enjoying the sight of thy Mother’s glory: oh! present to her the prayers we are offering to her during this Month, which is consecrated to her, and obtain for us the petitions which we presume to make to her.