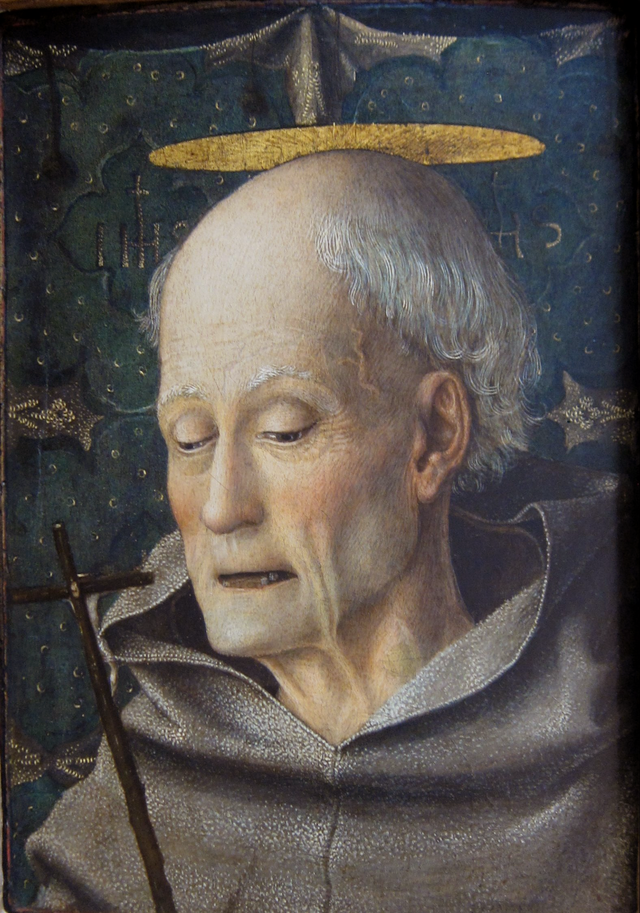 In that Season of the Liturgical Year when we were loving and praying around the Crib of the Infant Jesus, one of its days was devoted to our celebrating the glory and sweetness of his Name. Holy Church was full of joy in pronouncing the dear Name chosen, from all eternity, by her heavenly Spouse; and mankind found consolation in the thought that the great God, who might so justly have bid us call him the Just and the Avenger, willed us henceforth to call him the Savior. The devout Bernardin of Sienna, whose feast we keep today, stood then before us, holding in his hands this ever blessed Name, surrounded with rays. He urged the whole earth to venerate, with love and confidence, the sacred Name which expresses the whole economy of our salvation. The Church, ever attentive to what is for the good of her Children, adopted the beautiful device. She encouraged them to receive it from the Saint, as a shield that would protect them against the darts of the evil spirit, and as an additional means for reminding us of the exceeding charity wherewith God has loved this world of ours. And finally, when the loveliness of the Holy Name of Jesus had won all Christian hearts, she instituted, in its honor, one of the most beautiful solemnities of Christmastide.

Bernardin, the worthy son of St. Francis of Assisi, returns to us on this twentieth day of May, and the sweet flower of the Holy Name is, of course, in his hand. But it is not now the prophetic appellation of the newborn Babe; it is not the endearing Name, respectfully and lovingly whispered by the Virgin-Mother over the Crib;—it is the Name, whose sound has gone through the whole creation, it is the trophy of the grandest of victories, it is the fulfillment of all that was prophesied. The Name of Jesus was a promise to mankind of a Savior; Jesus has saved mankind by dying and rising again; he is now Jesus in the full sense of the word. Go where you will, and you hear his Name—the Name that has united men into the one great family of the Church.

The chief priests of the Synagogue strove to stifle the Name of Jesus, for it was even then winning men’s hearts. They forbade the Apostles to teach in this Name; and it was on this occasion that Peter uttered the words which embody the whole energy of the Church: We ought to obey God, rather than men. The Synagogue might as well have tried to stay the course of the sun. So too, when the mighty power of the Roman Empire set itself against the triumphant progress of this Name, and would annul the decree that every knee should bow at its sound—there was not merely a failure, but at the end of three centuries, the Name of Jesus was heard and loved in every city and hamlet of the Empire.

Armed with this sacred motto, Bernardin traversed the towns of Italy, which, at that period (the 15th century) were at enmity with each other and, not unfrequently, were torn with domestic strifes. The Name of Jesus, which he carried in his hand, became as a rainbow of reconciliation; and wheresoever he set it up, there every knee bowed down, every vindictive heart was appeased, and sinners hastened to the sacrament of pardon. The three letters (I H S), which represent this Name, became familiar to the Faithful; they were everywhere to be seen, carved or engraven or painted; and the Catholic world thus gained a new form whereby to express its adoration and love of its Savior.

Bernardin was a preacher whose eloquence was of heaven’s inspiring. He was also a distinguished master in the science of sacred things, as is proved by the Writings he has left us. We regret not being able, from want of space, to give our readers his words on the greatness of the Paschal mystery; but we cannot withhold from them what he says regarding Jesus’ appearing to his Blessed Mother, after the Resurrection. They will be rejoiced at finding unity of doctrine on this interesting subject, existing between the Franciscan School, represented by St. Bernardin, and the School of St. Dominic, whose testimony we have already given, on the Feast of St. Vincent Ferrer.

“From the fact of there being no mention made in the Gospel of the visit wherewith Christ consoled his Mother, after his Resurrection, we are not to conclude that this most merciful Jesus—the source of all grace and consolation, who was so anxious to gladden his Disciples by his presence—forgot his Mother, who he knew had drunk so deeply of the bitterness of his Passion. But it has pleased divine Providence that the Gospel should be silent on this subject; and this for three reasons.

“In the first place, because of the firmness of Mary’s Faith. The confidence which the Virgin-Mother had of her Son’s rising again, had never faltered, not even by the slightest doubt. this we can readily believe, if we reflect on the special grace wherewith she was filled, she the Mother of the Man-God, the Queen of Angels, and the Mistress of the world. To a truly enlightened mind, the silence of the Scripture, on this subjects, says more than any affirmation could have done. We have learned to know something of Mary by the visit she received from the Angel, when the Holy Ghost overshadowed her. We met her again at the foot of the Cross, where she, the Mother of Sorrows, stood nigh her dying Son. If then the Apostle could say: As ye are partakers of the sufferings, so shall ye be also of the consolation:—what share must not the Virgin Mother have had in the joys of the Resurrection? We should hold it as a certain truth, that her most sweet Jesus, after his Resurrection, consoled her first of all. The holy Roman Church would seem to express this, by celebrating at Saint Mary Major’s the Station of Easter Sunday. Moreover, if, from the silence of the Evangelist, you would conclude that our Risen Lord did not appear to her first—you must go further, and say that he did not appear to her at all, inasmuch as these same Evangelists, when relating the several apparitions, did not mention a single one as made to her. Now, such a conclusion as this would savor of impiety.

“In the second place, the silence of the Gospel is explained by the incredulity of men. The object of the Holy Spirit, when dictating the Gospels, was to describe such Apparitions as would remove all doubt, from carnal-minded men, with regard to the Resurrection of Christ. The fact of Mary’s being his Mother would have weakened her testimony, at least in their eyes. For this reason, she was not brought forward as a witness, though, most assuredly, there never was or will be any creature (the humanity of her Son alone excepted) whose assertion better deserved the confidence of every truly pious soul. But the text of the Gospel was not to adduce any testimonies, save such as might be offered to the whole world. As to Jesus’ Apparition to his Mother, the Holy Ghost has left it to be believed by those that are enlightened by his light.

“In the third place, this silence is explained by the sublime nature of the Apparition itself. The Gospel says nothing regarding the Mother of Christ, after the Resurrection; and the reason is that her interviews with her Son were so sublime and ineffable, that no words could have described them. There are two sorts of visions: one is merely corporal, and feeble in proportion; the other is mainly in the soul, and is granted only to such as have been transformed. Say, if you will, that Magdalene was the first to have the merely corporal vision, provided that you admit that the Blessed Virgin saw, previously to Magdalene, and in a far sublimer way, her Risen Jesus, that she recognized him, and enjoyed his sweet embraces in her soul, more even than in her body.”

Let us now read the Life of our Saint, as given, though too briefly, in the Lessons of today’s Office.

How beautiful, O Bernardin, are the rays that form the aureola round the Name of Jesus! How soft their light on that eighth day after his birth, when he received this Name! But how dazzling, now that this Jesus achieves our salvation, not only by humiliation and suffering, but by the triumph of his Resurrection! Thou comest to us, O Bernardin, in the midst of the Paschal glory of the Name of Jesus. This Name, for which thou didst so lovingly and zealously labor, gives thee to share in its immortal victory. Now, therefore, pour forth upon us, even more abundantly than when thou wast here on earth, the treasures of love, admiration and hope, of which this divine Name is the source, and cleanse the eyes of our soul, that we may, one day, be enabled to join thee in contemplating its beauty and magnificence.

Apostle of peace! Italy, whose factions were so often quelled by thee, may well number thee among her protectors. Behold her now a prey to the enemies of Jesus, rebellious against the Church of God, and abandoned to her fate. Oh! forget not that she is thy native land, that she was obedient to thy preaching, and that thy memory was long most dear to her. Intercede in her favor; deliver her from her oppressors; and show that when earthly armies fail, the hosts of heaven can always save both cities and countries.

Illustrious son of the great Patriarch of Assisi! the seraphic Order venerates thee as one of its main supports. Thou didst reanimate it to its primitive observance; continue, now from heaven, to protect the work thou commencedst here on earth. The Order of St. Francis is one of the grandest consolations of holy Mother Church; make this Order forever flourish, protect it in its trials, give it increase in proportion to the necessities of the Faithful; for thou art the second Father of this venerable family, and thy prayers are powerful with the Redeemer, whose glorious Name thou confessedst upon earth.