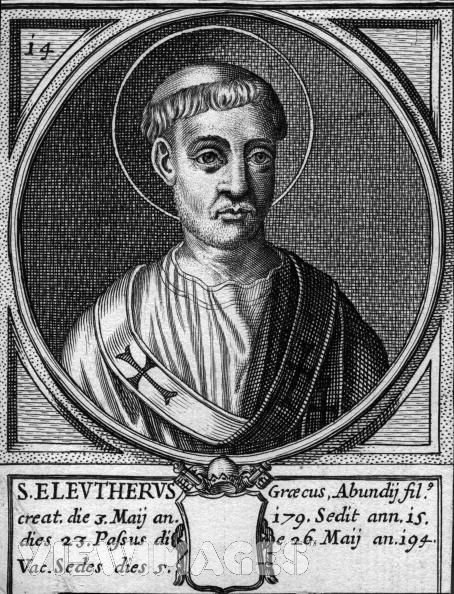 This twenty-sixty of May is also honored by the memory of one of those early Pontiffs who, like Urban, were the foundations of the Church in the Age of Persecution. Eleutherius ascended the Papal Throne in the very midst of the storm that was raised by Marcus Aurelius and Commodus. It was he that received the embassy that was sent to Rome by the Martyrs of Lyons’ and, at the head of them that were thus sent, was the great St. Irenæus. This illustrious Church, which was then so rich in Martyrdom, would offer its palms to Christian Rome, in which, to use St. Irenæus’ own expression, it recognized “the highest Sovereignty.”

Peace, however, was soon restored to the Church, and the remainder of Eleutherius’ pontificate was undisturbed. In the enjoyment of this peace, and with his name, which signifies a Freeman, this Pontiff is an image of our Risen Jesus, who, as the Psalmist says of him, is free among the dead.

The Church honors St. Eleutherius as a Martyr, as she does the other Popes who lived before Constantine, and of whom almost all shed their blood in the Persecutions of the first three centuries. Sharing, as they did, in all the sufferings of the Church, governing it amidst perils of every description, and seldom or never knowing what peace was—these three and thirty Pontiffs have every right to be considered as Martyrs.

A special glory for Eleutherius is his having been the Apostle of our own dear Country. The Romans had made Britain one of their colonies, and thus brought the island into intercourse with the rest of the world. Divine Providence chose the peaceful years of Eleutherius as the time for uniting it to the Church, at least in some measure. This was the 2nd Century. But later on, our England was to become the Island of Saints; and this same day gives us our second Apostle—St. Augustine.

Thy name, O Eleutherius, is the name of every Christian that has risen with Christ. The Pasch has delivered us all, emancipated all, made us all freemen. Pray for us, that we may ever preserve that glorious Liberty of the Children of God, of which the Apostle speaks. By it were we freed from the chains of sin, which consigned us to death; from the slavery of Satan, who would fain have robbed us of our Last End; and from the tyranny of the world, which was deceiving us by its false maxims. The New Life given to us by our Pasch is one that is all of heaven, where our Jesus is awaiting us in glory; to lose it would be to return to slavery. Holy Pontiff! pray for us, that, when the Pasch of next year comes, it may find us in that happy Liberty which the fruit of our having been redeemed by Christ.

There is another kind of Liberty of which the world boasts, and for the acquiring which it sets men at variance with men. It consists in avoiding as a crime all subjection and dependence, and in recognizing no authority except the one appointed by our own elections, which we can remove as soon as we please. Deliver us, O holy Pontiff, from this false Liberty, which is so opposed to the Christian Spirit of obedience, and is simply the triumph of human pride. In its frenzy, it sheds torrents of blood; and with its pompous cant of what it calls the Rights of Man, it substitutes egoism for duty. It acknowledges no such thing as Truth, for it maintains that Error has its sacred rights; it acknowledges no such thing as Good, for it has given up all pretension to preventing Evil. It puts God aside, for it refuses to recognize him in those who govern. It puts upon man the yoke of brute force: it tyrannizes over him by what it calls a “Majority;” and it answers every complaint, that he may make against injustice, by the jargon of “Accomplished Facts.” No—this is not the Liberty into which we are called by Christ, our Deliverer. We are Free, as St. Peter says, and yet make not Liberty a cloak for malice.

O holy Pontiff! show thyself still a Father to the world. During thy peaceful reign, thy throne was near to that of the Cæsars, who governed the Seven Hilled City. They were the Rulers of the world, and yet thy name was revered in every part of their Empire. While the material power held the sword suspended over thy head, the Faithful of various distant lands were flocking to Rome, there to venerate the Tomb of Peter, and pay homage to thee his Successor. When Lucius sent ambassadors from his Island, they turned not their steps to the Emperor’s Palace, but to thine humble dwelling. They came to tell that that a people was called by divine grace, to receive the Good Tidings, and become a portion of the Christian family. The destinies of this people, which thou wast the first to evangelize, were to be great in the Church. The Island of the Britains is a daughter of the Roman Church; and the attempts she is now making to disown her origin are useless. Have pity on her, O thou that wast her first Apostle! Bless the efforts which are being everywhere made to bring her back to unity with the Church. Remember the faith of Lucius and his people; and show thy paternal solicitude for a Country which thou didst lead to the Faith.