Saint Bede the Venerable, Confessor and Doctor of the Church 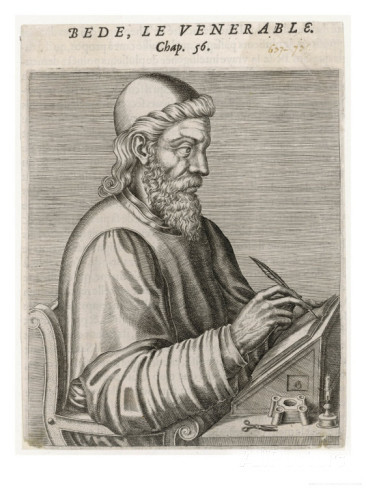 The blessing given by our Lord as he ascended into heaven has revealed its power in the most distant pagan lands, and during these days the liturgical cycle bears witness to a concentration of graces upon the west of Europe.

The band of missionaries begged of Pope Eleutherius by the British king Lucius has been followed by the apostolate of Augustine. the envoy of Gregory the Great, and today, as though impatient to justify the lavish generosity of heaven, England brings forward her illustrious son, the Venerable Bede. This humble monk, whose whole life was spent in the praise of God. sought his divine Master in nature and in history, but above all in holy Scripture, which he studied with a loving attention and fidelity to tradition. He who was ever a disciple of the ancients. takes his place to-day among his masters as a Father and Doctor of the Church.

He thus sums up his own life: “I am a priest of the monastery of the blessed Apostles Peter and Paul. I was born on their land, and ever since my seventh year I have always lived in their house, observing the Rule, singing day by day in their church, and making it my delight to learn, to teach or to write. Since I was made a priest, I have written commentaries on the holy Scripture for myself and my brethren, using the words of our venerated Fathers and following their method of interpretation. And now, good Jesus, I beseech thee, thou who hast given me in thy mercy to drink of the sweetness of thy word. grant me now to attain to the source, the fount of wisdom, and to gaze upon thee for ever and ever.”

The holy death of the servant of God was one of the most precious lessons he left to his disciples. His last sickness lasted fifty days, and he spent them, like the rest of his life, in singing the psalms and in teaching. As the Feast of the Ascension drew near, he repeated over and over again with tears of joy the Antiphon: “O king of glory, who hast ascended triumphantly above the heavens, leave us not orphans, but send us the promise of the Father, the Spirit of truth.” He said to his disciples in the words of St Ambrose: “I have not lived in such a sort as to be ashamed to live with you, but I am not afraid to die, for we have a good Master.” Then, returning to his translation of the Gospel of St. John and a work, which he had begun, on St Isidore, he would say: “I do not wish my disciples to be hindered after my death by error nor to lose the fruit of their studies.”

On the Tuesday before the Ascension he grew worse, and it was evident that the end was near. He was full of joy and spent the day in dictating and the hight in prayers of thanksgiving. The dawn of Wednesday morning found him urging his disciples to hurry on their work. At the hour of Terce they left him to take part in the procession made on that day with the relics of the saints. One of them, a child who stayed with him said: “Dear master. there is but one chapter left; hast thou strength for it?” “It is easy,” he answered with a smile; “take thy pen, cut it and write—but make haste.” At the hour of None, he sent for the priests of the monastery and gave them little presents, begging them to remember him at the altar. All wept. But he was full of joy, saying: “It is time for me, if it so please my Creator, to return to him who made me out of nothing, when as yet I was not. My sweet Judge has well ordered my life, and now the time of dissolution is at hand. I desire to be dissolved and to be with Christ. Yea, my soul longs to see Christ my king in his beauty.”

So did he pass this last day. Then came the touching dialogue with Wibert, the child mentioned above. “Dear master, there is yet one sentence more.” “Write quickly.” After a moment: “It is finished,” said the child. “Thou sayest well,” replied the blessed man. “It is finished. Take my head in thy hands and support me over against the Oratory, for it is a great joy to me to see myself over against that holy place where I have so often prayed.” They had laid him on the floor of his cell. He said: “Glory be to the Father, and to the Son, and to the Holy Ghost,” and when he had named the Holy Ghost, he yielded up his soul.

The following account of this holy monk is given in the Breviary:

“Glory be to the Father, and to the Son, and to the Holy Ghost” is the hymn of eternity. Before the creation of the angels and of man, God, in the concert of the three divine Persons, sufficed for his own praise, and this praise was adequate, infinite and perfect, like the divinity. This was the only praise worthy of God. However magnificently the world may hymn its Creator in the thousand voices of nature, its praise is always below the divine Object. But, in the designs of God. creation was one day to send up to heaven an echo of that melody which is threefold and yet one, for the Word was to take flesh, through the operation of the Holy Ghost, in the womb of Mary, and was to be Son of Man as truly as he is Son of God. Then the canticle of creation fully and perfectly re-echoed the adorable harmonies once known only to the blessed Trinity. Since that day a man who has understanding finds his perfection in such conformity to the Son of Mary, that he may be one with the Son of God in the divine concert wherein God is glorified.

This, O Bede, was thy life. for understanding was given thee. It was fitting that thy last breath should be spent in that song of love which had filled thy mortal life, and that thus thou shouldst enter at once into a glorious and blessed eternity. May we profit by that supreme lesson, which sums up all the teaching of thy grand and simple life!

Glory be to the almighty and merciful Trinity! These words form the close of the cycle of the mysteries which terminate at this time in the glorification of the Father, our sovereign Lord, by the triumph of the Son our Redeemer, and the inauguration of the reign of the Holy Ghost, our sanctifier. How splendid were the triumph of the Son and the reign of the Holy Ghost in the Isle of Saints in the days when Albion, twice given by Rome to Christ, shone like a priceless jewel in the diadem of the Spouse! O thou who wast the teacher of the English in the days of their fidelity, do not disappoint the hopes of the supreme Pontiff who has in our days extended thy cult to the Universal Church; but rekindle in the hearts of thy countrymen their former love for the Mother of all mankind.