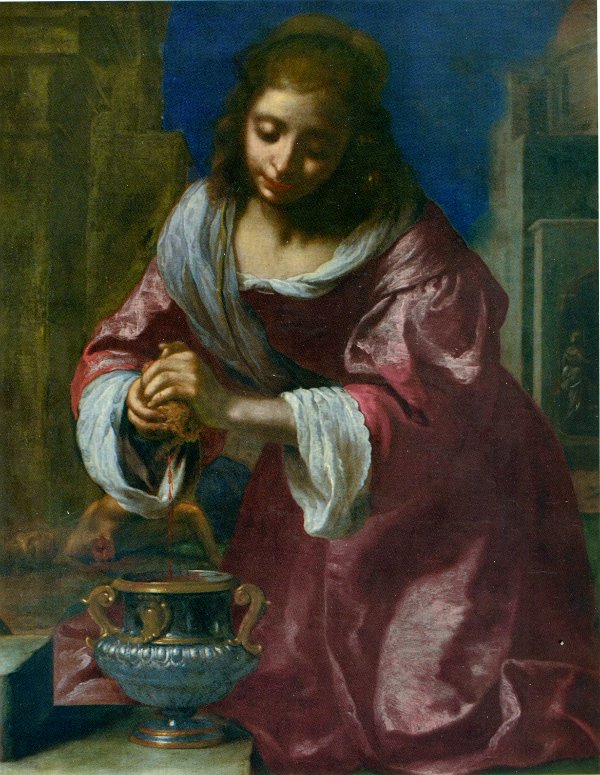 On this day Pudentiana’s angelic sister at length obtained from her Spouse release from bondage, and from the burden of exile that weighed so heavily on this last scion of a holy and illustrious stock. New races, unknown to her fathers when they laid the world at the feet of Rome, now governed the Eternal City. Nero and Domitian had been actuated by a tyrannical spirit; but the philosophical Cæsars showed how absolutely they misconceived the estinies of the great city. The salvation of Rome lay in the hands of a different dynasty: a century back, Praxedes’ grandfather, more legitimate inheritor of the traditions of the Capitol than all the Emperors present or to come, hailed in his guest, Simon Bar-Jona, the ruler of the future. Host of the Prince of the Apostles was a title handed down by Pudens to his posterity: for in the time of Pius I, as in that of St. Peter, his house was still the shelter of the Vicar of Christ. Left the sole heiress of such traditions, Praxedes, after the death of her beloeved sister, converted her palaces into Churches, which resounded day and night with divine praises, and where pagans hastened in crowds to be baptized. The policy of Antoninus respected the dwelling of a descendant of the Cornelii; but his adopted son, Marcus Aurelius, would make no such exception. An assault was made upon the title of Praxedes, and many Christians were taken and put to the sword. The virgin, overpowered with grief at seeing all slain around her, and herself untouched, turned to God and besought him that she might die. Her body was laid with those of her relatives in the cemetery of her grandmother, Priscilla. The following is the short notice given by the Church:

Mother Church is ever grateful to thee, O Praxedes! Thou hast long been in the enjoyment of thy divine spouse, and still thou continuest the traditions of thy noble family, for the benefit of the Saints on earth. When, in the eighth and ninth centuries, the martyrs, exposed to the profanations of the Lombards, were raised from their tombs and brought within the walls of the eternal City, Paschal I sought hospitality for them, where Peter had found it in the first century. What a day was that 20th of July 817, when, leaving the Catacombs, 2300 of these heroes of Christ came to seek in the title of Praxedes the repose which the barbarians had disturbed! What a tribute Rome offered thee, O Virgin, on that day! Can we do better than unite our homage with that of this glorious band, coming on the day of thy blessed feast, thus to acknowledge thy benefits? Descendant of Pudens and Priscilla, give us thy love of Peter, thy devotedness to the Church, thy zeal for the Saints of God, whether militant still on earth or already reigning in glory.