Cajetan appeared in all his zeal for the sanctuary at the time when the false reform was spreading rebellion throughout the world. The great cause of the danger had been the incapacity of the guardians of the holy City, or their connivance by complicity of heart or of mind with pagan doctrines and manners introduced by an ill-advised revival. Wasted by the wild boar of the forest, could the vineyard of the Lord recover the fertility of its better days? Cajetan larned from Eternal Wisdom the new method of culture required by an exhausted soil.

The urgent need of those unfortunate times was that the clergy should be raised up again by worthy life, zeal, and knowledge. For this object men were required, who being clerks themselves in the full acceptation of the word, with all the obligations it involves, should be to the members of the holy hierarchy a permanent model of its primitive perfection, a supplement to their shortcomings, and a leaven, little by little raising the whole mass. But where, save in the life fo the counself with the stability of its three vows, could be found the impulse, the power, and the permanence necessary for such an enterprise? The inexhaustible fecundity of the religious life was no more wanting in the Church in those days of decadence than in the periods of her glory. After the monks, turning to God in their solitudes and drawing down light and love upon the earth seemingly so forgotten by them; after the mendicant Orders, keeping up in the midst of the world their claustral habits of life and the austerity of the desert: the regular clerks entered upon the battlefield, whereby their position in the fight, their exterior manner of life, their very dress, they were to mingle with the ranks of the secular clergy; just as a few veterans are sent into the midst of a wavering troop, to act upon the rest by word and example and dash. 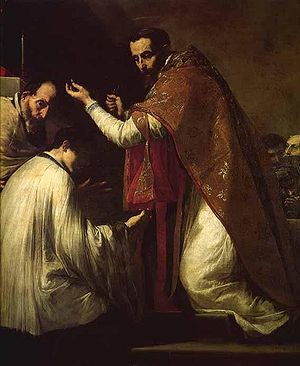