Within the Octave of the Assumption; Saint Joachim, Confessor, Father of the Blessed Virgin Mary 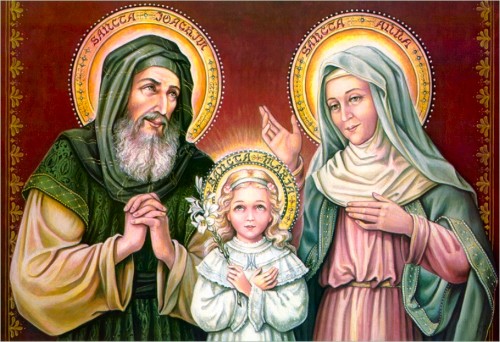 From time immemorial the Greeks have celebrated the feast of St. Joachim on the day following our Lady’s birthday. The Maronites kept it on the day after the Presentation in November, and the Armenians on the Tuesday after the Octave of the Assumption of the Mother of God. The Latins at first did not keep his feast. Later on it was admitted and celebrated sometimes on the day after the Octave of the Nativity, September 16th, sometimes on the day following the Conception of the Blessed Virgin, December 9th. Thus both East and West agreed in associating St. Joachim with his illustrious daughter when they wished to do him honor.

About the year 1510, Julius II placed the feast of the grandfather of the Messias upon the Roman Calendar with the rank of double major; and remembering that family, in which the ties of nature and of grace were in such perfect harmony, he fixed the solemnity on the 20th March, the day after that of his son-in-law, St. Joseph. The life of the glorious patriarch resembled those of the first fathers of the Hebrew people; and it seemed as though he were destined to imitate their wanderings also, by continually changing his place upon the sacred cycle.

Hardly fifty years after the Pontificate of Julius II the critical spirit of the day cast doubts upon the history of St. Joachim, and his name was erased from the Roman breviary. Gregory XV, however, re-established his feast in 1622 as a double, and the Church has since continued to celebrate it. Devotion to our Lady’s father continuing to increase very much, the Holy See was petitioned to make his feast a holy day of obligation, as it had already made that of his spouse, St. Anne. In order to satisfy the devotion of the people without increasing the number of days of obligation, Clement XII in 1738 transferred the feast of St. Joachim to the Sunday after the Assumption of his daughter, the Blessed Virgin, and restored it to the rank of double major.

On the 1st August 1879, the Sovereign Pontiff, Leo XIII, who received the name of Joachim in baptism, raised both the feast of his glorious patron and that of St. Anne to the rank of doubles of the second class.

The following is an extract from the decree Urbi et Orbi, announcing this final decision with regard to the said feasts: “Ecclesiasticus teaches us that we ought to praise our fathers in their generation; what great honor and veneration ought we then to render to St. Joachim and St. Anne, who begot the Immaculate Virgin Mother of God, and are on that account more glorious than all others.”

“By your fruits you are known,” says St. John Damascene, “you have given birth to a daughter who is greater than the Angels and has become their Queen.” Now since, through the divine mercy, in our unhappy times the honor and worship paid to the Blessed Virgin is increasing in proportion to the increasing needs of the Christian people, it is only right that the new glory which surrounds their blessed daughter should redound upon her happy parents. May this increase of devotion towards them cause the Church to experience still more their powerful protection.

Mass.—Prayer is good with fasting and alms more than to lay up treasures of gold. Far better than Tobias, did Joachim experience the truth of the Archangel’s word. Tradition says that he divided his income into three parts: one for the Temple, the second for the poor, and the third for his family. The Church, wishing to honor Mary’s father, begins by praising this liberality, and also his justice which earned him such great glory.

Mother of God: such is the title which exalts Mary above all creatures; but Joachim, too, is ennobled by it; he alone can be called, for all eternity, Grandfather of Jesus. In heaven, even more than on earth, nobility and power go hand in hand. Let us then, with the Church, become humble clients of one so great.

A commemoration is here made of the Sunday within the Octave.

Joachim’s wealth, like that of the first patriarchs, consisted chiefly in flocks and herds. The holy use he made of it drew down God’s blessing upon it. But the greatest of all his desires heaven seemed to refuse him. His holy spouse Anne was barren. Amongst all the daughters of Israel expecting the Messias, there was no hope for her. One day the victims Joachim presented in the Temple were contemptuously rejected. Those were not the gifts the Lord of the Temple desired of him; later on, instead of lambs from his pastures, he was to present the Mother of the Lamb of God, and his offering would not be rejected.

This day, however, he was filled with sorrow and fled away without returning to his wife. He hastened to the mountains where his flocks were at pasture; and living in a tent, he fasted continually, for he said: “I will take no food till the Lord my God look mercifully upon me; prayer shall be my nourishment.”

Meanwhile Anne was mourning her widowhood and her barrenness. She prayed in her garden as Joachim was praying on the mountain. Their prayers ascended at the same time to the Most High, and he granted them their request. An Angel of the Lord appeared to each of them and bade them meet at the Golden Gate, and soon Anne could say: “Now I know that the Lord hath greatly blessed me. For I was a widow and I am one no longer, and I was barren, and lo! I have conceived!”

The Gradual again proclaims the merit of alms-giving and the value God sets upon holiness of life. The descendants of Joachim shall be mighty and blessed in heaven and upon earth. May he deign to exert his influence with his all holy daughter, and with his grandson Jesus, for our salvation.

“Rejoice, O Joachim, for of thy daughter a Son is born to us,” exclaims St. John Damascene. It is in this spirit the Church reads today the list of the royal ancestors of our Savior. Joseph, the descendant of these illustrious princes, inherited their rights and passed them on to Jesus, who was his Son according to the Jewish law, though according to nature he was of the line of his Virgin Mother alone.

St. Luke, Mary’s Evangelist, has preserved the names of the direct ancestors of the Mother of the Man-God, springing from David in the person of Nathan, Solomon’s brother. Joseph, the son of Jacob according to St. Matthew, appears in St. Luke as son of Heli. The reason is that by espousing Mary, the only daughter of Hili or Heliachim, that is Joachim, he became legally his son and heir.

This is the now generally received explanation of the two genealogies of Christ the Son of David. It is not surprising that Rome, the queen city who has become the Bride of the Son of man in the place of the repudiated Sion, prefers to use in her Liturgy the genealogy which by its long line of royal ancestors emphasizes the kingship of the Spouse over Jerusalem. The name of Joachim, which signifies “the preparation of the Lord,” is thus rendered more majestic, without losing aught of its mystical meaning.

He is himself crowned with wonderful glory. Jesus, his Grandson, gives him to share in his own authority over every creature. In the Offertory we celebrate St. Joachim’s dignity and power.

“Joachim, Anne and Mary,” says St. Epiphanius: “what a sacrifice of praise was offered to the Blessed Trinity by this earthly Trinity!” May their united intercession obtain for us the full effect of the sacrifice which is being prepared upon the Altar in honor of the head of this noble family.

While enjoying the delights of the sacred mysteries, let us not forget that if Mary gave us the Bread of Life, she herself came to us through Joachim. Let us confidently entrust to his prudent care the precious germ which we have just received, and which must now fructify our souls.

The Sacraments produce of themselves the essential grace belonging to them; but we need the intercession of the Saints to remove all obstacles to their full operation in our hearts. Such is the sense of the Postcommunion.

Then is added the Postcommunion of the Sunday within the Octave, and the Gospel of the same is read at the end of Mass, instead of that of St. John.

Father of Mary, we thank thee. All creation owes thee a debt of gratitude, since the Creator was pleased that thou shouldst give him the Mother he had chosen for himself.

Husband of holy Anne, thou showest us what would have been in Paradise; thou seemest to have been reinstated in primeval innocence, in order to give birth to the Immaculate Virgin: sanctify Christian life, and elevate the standard of morals. Thou art the Grandfather of Jesus: let thy paternal love embrace all Christians who are his brethren. Holy Church honors thee more than ever in these days of trial; she knows how powerful thou art with the Eternal and Almighty Father, who made thee instrumental, through thy blessed daughter, in the temporal Generation of his Eternal Son.