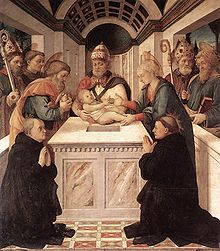 Our Lady is now reigning in heaven. Her triumph over death cost her no labor; and yet it was through suffering that she like Jesus entered into her glory. We too cannot attain eternal happiness otherwise than did the Son and the Mother. Let us keep in mind the sweet joys we have been tasting during the past week; but let us not forget that our own journey to heaven is not yet completed. “Why stand ye looking up into heaven!” said the Angels to the disciples on Ascension day, in the name of the Lord who had gone up in a cloud; for the disciples, who had for an instant beheld the threshold of heaven, could not resign themselves to turn their eyes once more down to this valley of exile. Mary, in her turn, sends us a message today from the bright land whither we are to follow her, and where we shall surround her, after having in the sorrows of exile merited to form her court: without distracting us from her, the Apostle of her dolors, Philip Benizi, reminds us of our true condition as strangers and pilgrims upon earth.

Combats without fears within: such for the most part was Philip’s life, as it was also the history of his native city Florence, of Italy too, and indeed of the whole christina world, in the 13th century. At the time of his birth, the city of flowers seemed a new Eden for the blossoms of sanctity that flourished there; nevertheless it was a prey to bloody factions, to the assaults of heresy, and to the extremity of every misery. Never is hell so near us as when heaven manifests itself with greatest intensity; this was clearly seen in that age, when the serpent’s head came in closest contact with the heel of the Woman. The old enemy, by creating new sects had shaken the faith in the very center of the provinces surrounding the eternla city. While in the east Islam was driving back the last crusaders, in the West the Papacy was struggling with the empire, which Frederick II had made as a fief of Satan. Throughout Christendom social union was undone, faith had grown weak, and love cold; but the old enemy was soon to discover the power of the reaction heaven was preparing for the relief of the aged world. Then it was that our Lady presented to her angered Son Dominic and Francis, that, by uniting science with self-abnegation, they might counterbalance the ignorance and luxury of the world, then too, Philip Benizi, the Servite of the Mother of God, received form her the mission of preaching through Italy, France, and Germany the unspeakable sufferings whereby she became the co-redemptress of the human race.

Philip, draw near, and join thyself to this chariot. When the world was smiling on thy youth and offering thee renown and pleasures, thou didst receive this invitation from Mary. She was seated in a golen chariot which signified the religious life; a mourning mantle wrapped her round; a dove was fluttering about her head; a lion and a lamb were drawing her chariot over precipices from whose depths were heard the groans of hell. It was a prophetic vision: thou wast to traverse the earth accompanied by the Mother of sorrows, and this world which hell had already everywhere undermined, was to have no danger for thee; for gentleness and strength were to be thy guides, and simplicity thy inspirer: Blessed are the meek, for they shall possess the land.

But this gentle virtue was to avail thee chiefly against heaven itself; heaven, which wrestles with the mighty, and which had in store for thee the terrible trial of an utter abandonment, such as had made even the God-Man tremble. After years of prayer and labor and heroic devotedness, for thy reward thou wast apparently rejected by God and disowned by the Church, while imminent ruin threatened all those whom Mary had confided to thee. In spite of her promises, the existence of thy sons the Servites was assailed by no less an authority than that of two General Councils, whose resolutions the Vicar of Christ had determined to confirm. Our Lady gave thee to drink of the chalice of her sufferings. Thou didst not live to see the triumph of a cause which was hers as well as thine; but as the ancient patriarchs saluted from afar the accomplishment of the promises, so death could not shake thy calm and resigned confidence. Thou didst leave thy daughter Juliana Falconieri to obtain by her prayers before the face of the Lord, what thou couldst not gain from the powers of this world.

The highest power on earth was once all but laid at thy feet; the Church, remembering the humility wherewith thou didst flee from the tiara, begs thee in the Collect for today to obtain for us, that we may despise the prosperity of this world and seek heavenly goods alone; deign to hear her prayer. But the Faithful have not forgotten that thou wert a physician of the body before becoming a healer of souls; they have great confidence in the water and bread blessed by thy sons on this feast, in memory of the miraculous favors granted to their father: graciously regard the faith of the people, and reward the special honor paid to thee by Christian physicians. Now that the mysterious chariot, shown thee at the beginning, has become the triumphal car whereon thou accompaniest our Lady in her entrance into heaven, teach us so to condole, like thee, with her sorrows, that we may deserve to be partakers with thee in her eternal glory.