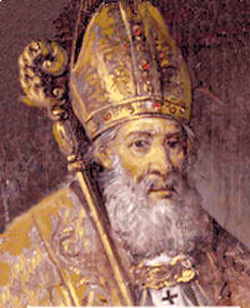 When asked to tell the names of the Saints who were foremost in defending the dogma of the Incarnation, we think at once of the intrepid Eusebius of Vercelli, as one of the glorious number. The Catholic faith, which was so violently attacked in the fourth century by the Arian heresy, was maintained at that time by the labors and zeal of four Sovereign Pontiffs: Sylvester, who confirmed the decrees of the Council of Nicæa; Julius, the supporter of Athanasius; Liberius, whose faith failed not, and who, when restored to his liberty, confounded the Arians; and lastly, Damasus, who destroyed the last hopes of the heretics. One of these four Pontiffs appears on our Advent Calendar—Damasus, whose feast we kept but a few days since. The four Popes have for their fellow combatants, in this battle for the Divinity of the Incarnate Word, four great Bishops, of whom it may be said the the defense of the dogma of the Consubstantiality of the Son of God was what they lived for, and that to say anathema to them was to say anathema to Christ himself; all four most powerful in word and work, lights of the Churches of the world, objects of the people’s love, and the dauntless witnesses of Jesus. The first and greatest of the four is the Bishop of the second See of Christendom, St. Athanasius, the Patriarch of Alexandria; the second is St. Ambrose of Milan, whose feast we kept on the seventh of this month; the third is the glory of Gaul, St. Hilary, Bishop of Poitiers; the fourth is the ornament of Italy, St. Eusebius, Bishop of Vercelli, whom we have to honor today. Hilary will come to us during Christmastide, and will stand at the Crib of the Word, whose Divinity he so bravely confesses; Athanasius will meet us at Easter, and help us to celebrate, in the triumphant Resurrection, Him whom he proclaimed as God in those dark times when human wisdom hoped to destroy, by a fifty years of peace, that Church which had survived the storm of three centuries of persecution. St. Eusebius’ place is Advent; and divine Providence has thus chosen him as one of the patrons of the faithful during this mystic season; his powerful prayers will help us to come devoutly to Bethlehem, and see in the Child that is lying there, the eternal Word of God. So great were the sufferings which St. Eusebius had to undergo for the Divinity of Jesus that the Church awards him the honors of a Martyr, although he did not actually shed his blood. Let us now listen to the admirable account which the Church gives us of his life.

Valiant Soldier of Jesus, Eusebius, Martyr and Pontiff, how much labor and suffering thou didst undergo for the Messias! And yet they seemed to thee to be little in comparison with what is due to this eternal Word of the Father, who, out of his pure love, has made himself the Servant of his own creatures by becoming Man for them in the mystery of the Incarnation. We owe the same debt of gratitude to this divine Savior. He is born in a stable for our sakes, as he was for thine; pray, therefore, for us that we may be ever faithful to him both in war and peace; and that we may resist our temptations and evil inclinations with that same firmness wherewith we would confess his name before tyrants and persecutors. Obtain for the Bishops of our holy Mother the Church such vigilance that no false doctrines may surprise them, and such courage that no persecution may make them yield. May they be faithful imitators of the divine Pastor, who gives his life for his sheep; and may they ever feed the flock entrusted to them, in the unity and charity of Jesus Christ.

Let us consider how our Blessed Lady, having returned to Nazareth, is overwhelmed with joy to feel living within her Him who gives being to every created thing, and whom she loves with all the intensity of the Mother of God. Joseph, the faithful guardian of her virginity, tenderly loves this his Spouse, and blesses God for having entrusted such a treasure to his keeping. The Angels crowd round this favored house wherein dwell their Sovereign Lord, and she whom he has chosen to be his Mother. Never was there happiness like that which fills this little dwelling; and yet, God has decreed to visit it with a heavy trial, in order that he may give an occasion to Mary to exercise heroic patience, and to Joseph an occasion of meriting by his exquisite prudence. Let us listen to the Meditation of St. Bonaventure, in which he thus ponders the Gospel narrative:

“But while our Lady and Joseph her Spouse were thus dwelling together, the Infant Jesus grew within his Mother’s womb. Then Joseph perceiving that Mary was with Child, he was above all measure grieved. Here give, I pray thee, all thine attention, for thou hast many fair things to learn. If thou wouldst know wherefore it was that our Lord wished that his Mother should have a husband, whereas he always wished that she should be a Virgin, I answer thee that he so wished on three accounts: firstly, that she might not be disgraced when it was seen that she was a Mother: secondly, that she might have Joseph’s aid and company; and thirdly, that the birth of the Son of God might be concealed from the devil.

“Now, Joseph did look many times on Mary, and grief and trouble of heart fell upon him, and his displeasure was seen in his face, and he turned his eyes away from her as one that was guilty of that which he perforce suspected. See how God permits his servants to be afflicted and sorely tried, that they may so receive their crown. Now, Joseph was minded to put her away privately. In very truth may it be said of this holy man that his praise is in the Gospel, for the Gospel says of him that he was a just man, that is, a man of great virtue. For albeit they say that no shame, nor suffering, nor insult can befall a man so grievous as that of his wife’s unfaithfulness; yet did Joseph restrain himself withal, and would not accuse Mary, but bore this great injury patiently. He sought not how to avenge himself but, overcome with pity, and wishing to forgive, he was minded to put her away privately. But herein also had our Lady her share of tribulation, for she took notice of Joseph’s trouble, and it sorely grieved her. Yet did she humbly hold her peace, and hide the gift of God. Better did it seem unto her that evil should be thought of her, than that she should reveal the divine Mystery, and say aught of herself which would come nigh to boasting. Therefore did she beseech our Lord that himself would right this matter, and make pass this grief from Joseph and herself. Her thou mayest learn what great tribulation and anxiety was theirs. But God came unto their assistance.

“He therefore sent his Angel, who spake unto Joseph in his sleep, and told him that his Spouse had conceived of the Holy Ghost, and that he was to abide with her in all surety and joy. Whereupon all tribulation ceased, and they were both exceedingly comforted. So likewise would it befall us if we would suffer patiently, for after a storm God brings a calm. Neither oughtest thou to doubt this, for God suffereth not his servants to be afflicted save for their good. After this, Joseph requested our Lady to narrate unto him what had happened; and she faithfully narrated all unto him. Whereupon Joseph remains with his Blessed Spouse, and lives with her in all contentment, and loves her above what words can say, and diligently proves her whatsoever she needed. So also our Lady continues to remain confidently with Joseph, and they live right joyfully in their poverty.”